Could the current monkeypox outbreak be natural?

Hot on the heels of the man-made COVID-19 “pandemic”, the world is witnessing another suspicious outbreak—this time of monkeypox, which is endemic in Central and West Africa but has so far only sporadically appeared outside this area. In contrast, the current outbreak affects more than twenty countries outside Africa. I here examine whether it is plausible that this could have happened naturally.

1. Some basic facts on monkeypox

During the current outbreak, it has been reported that the virus was spread predominantly among homosexual men. Similarly, in previous case reports, it was noted that the primary lesions occurred on the genitals of the affected male patients [1,2], suggesting that transmission had occurred by sexual transmission. However, all lesions of the skin and of the mucous membranes are potentially infectious, and there is no reason to assume that the mode of transmission will remain limited in this manner.

Smallpox vaccination has been reported to protect monkeys from monkeypox [3–6], and partial protection has also been reported in humans [7,8]. It should be kept in mind, though, that the smallpox vaccine always was fraught with a comparatively high incidence of severe and sometimes fatal adverse events [9–12]. Thus, should the currently beginning monkeypox scare be used to institute a general smallpox vaccination campaign, more unnecessary vaccine damage and death is virtually certain. 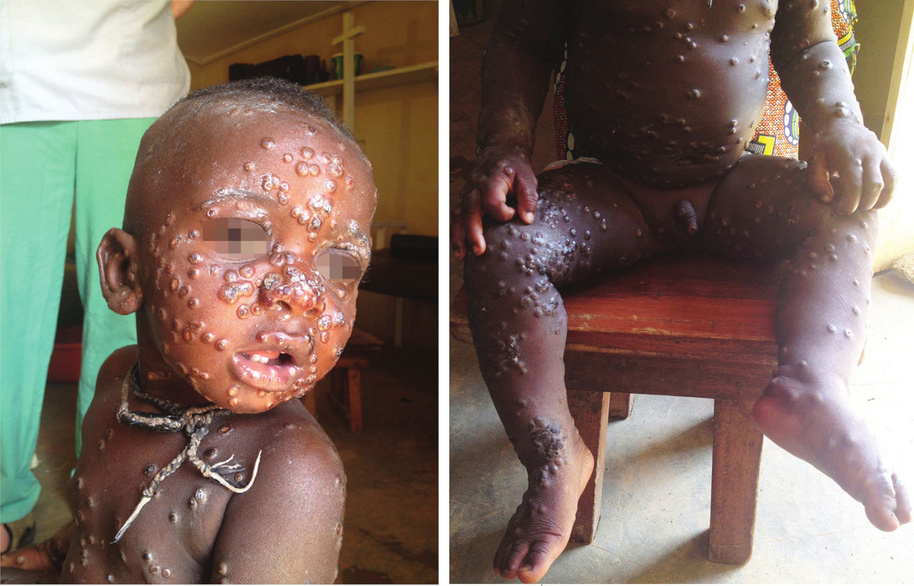 The skin lesions in monkeypox (pictures taken from [13]) look very much like those in smallpox; they are large and sometimes confluent. The lesions are initially flat and red, then raised, and finally form vesicles and pustules. Lesions at various stages can be observed simultaneously. The mucous membranes and, in severe cases, interior organs are affected as well. Unambiguous differentiation from smallpox—assuming it is still or again in circulation—or from infection with other, rarer poxviruses would require laboratory methods.

The incubation time is typically 10-14 days; onset of fever typically precedes the appearance of the rash by about 2 days. Both skin and mucosal eruptions are infectious.

3. Confusion with shingles should be avoidable … 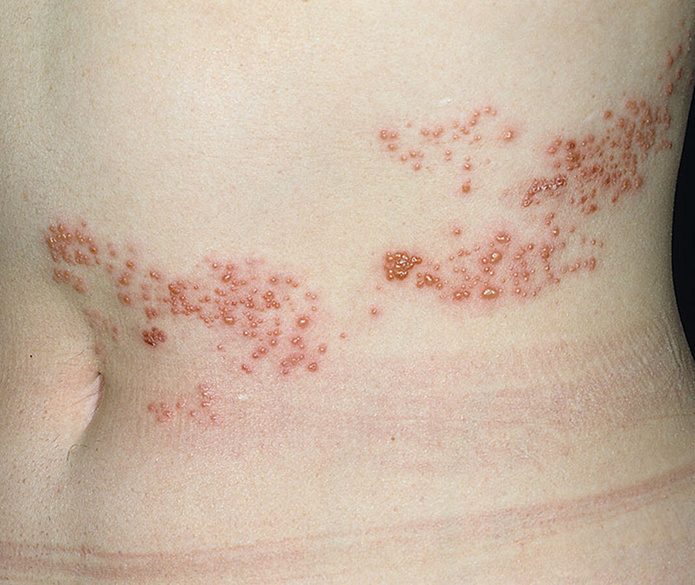 It has been suggested that the recent monkeypox might simply have been conjured up to provide cover for the increased occurrence of shingles after COVID-19 vaccination [14,15], which is likely due to these vaccines’ immunosuppressive effects [16]. However, it should be easy enough to differentiate these two diseases. The skin lesions do look different, and moreover shingles are typically confined to a single dermatome, that is, a skin area whose sensory nerves originate from a single dorsal root of the spinal cord.

A somewhat more plausible error is to confuse chickenpox and monkeypox. Chickenpox and shingles are caused by the same virus that (the Varicella-Zoster Virus, which belongs to the Herpes group), but chickenpox causes a generalized rash. Even though the aspect of the lesions is different—in particular, with monkeypox, all lesions develop synchronously, whereas with chickenpox multiple stages occur side by side—it seems that this error has indeed been common during monkeypox outbreaks in Africa [17]. 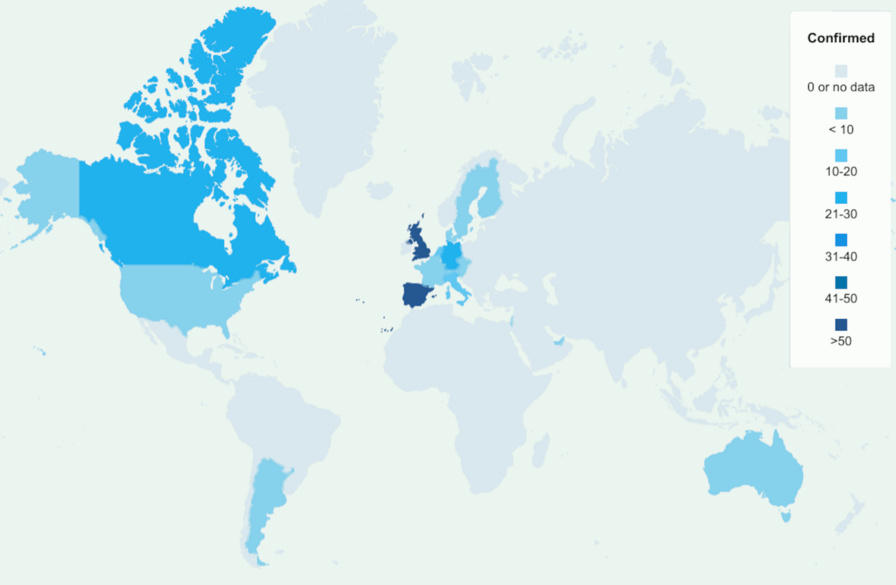 As of May 28, 2022, twenty-two countries are listed as affected by the current monkeypox outbreak on the website from which this map was obtained [18]. The highest case numbers (>100 each) have been reported from the UK and Spain. The number of cases and of countries affected appears to be rising daily.

Quebec has already announced plans to deploy vaccines to contain the ongoing outbreak. The CDC has come out with recommendations for vaccinating healthcare and laboratory personnel [19]. For now, the predominant messaging is that a spread of monkeypox throughout the population is “unlikely”. However, how plausible is the extent of the spread which we reportedly have already reached?

5. How likely is a simultaneous outbreak in multiple countries worldwide? Total and suspected cases in Africa 1970-2018 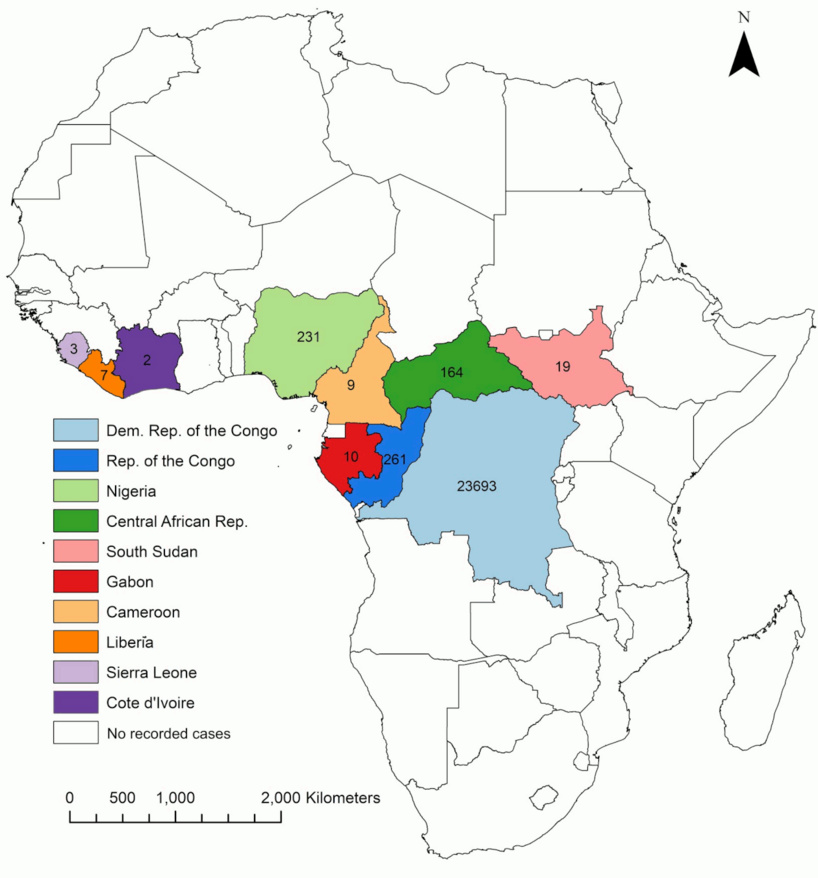 This map, taken from Beer and Rao [20], summarizes the cases that were observed in Africa throughout 5 consecutive decades. Its most striking feature is the very limited geographic spread. All cases occurred within two circumscribed areas in Central and West Africa, respectively, where the virus is endemic among wild animals. It bears mention that there are two different variants (“clades”) of the virus; the West African reportedly causes milder disease than the Central African one [2].

The restriction of observed cases to the areas with animal reservoirs reflects the fact that most human cases arise through direct contact with an infected animal. While human-to-human transmission is possible, it is not efficient enough to permit the virus to establish and sustain itself in the human population. Beer and Rao [20] state that “between 0-11% of unvaccinated contacts of primary cases may become clinical cases during an outbreak,” and that the net reproductive number—that is, the number of secondary cases spawned, on average, by an established case—is 0.3.

An earlier review of the African situation stated that “the low transmissibility … indicates that monkeypox is not a public health problem” [21]. The tenor of recent reviews (e.g. [22,23]) is notably more “worried,” even though the evidence in the field has not substantially changed, as will be clear from the two following maps.

This map—taken from the “worried” review by Bunge et al. [23]—illustrates the worldwide cases in the first decade of the millennium. South Sudan is part of or adjoins the endemic area. The only country clearly outside the endemic area t be affected in this decade were the United States; this event will be discussed below.

In the subsequent decade, the only countries outside the endemic areas to be affected were Israel with a single case and the UK with four cases according to [23], but only three according to [24]. The latter report states that two of the cases in the UK occurred in travellers to Nigeria, where the disease is endemic. One additional case occurred through transmission in the UK from one of the patients to a healthcare worker.

Overall, therefore, it is clear that until very recently there was no evidence to suggest the possibility of a simultaneous outbreak in multiple countries and on multiple continents such as the one we are currently witnessing. 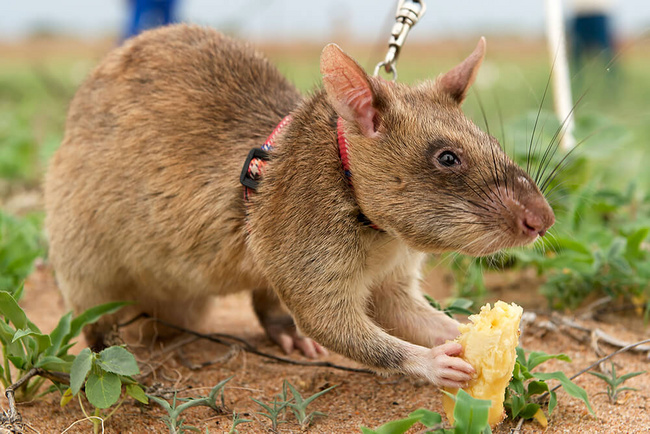 The total number of confirmed cases is given as 47 by [20] and [25]. A short report by the CDC [26] mentions 53 cases that were “investigated” but does not specify how many were ultimately confirmed. The CDC report also states that all patients had had direct contact with infected animals. None of the cases ended fatally, but there was one case of encephalitis in a child; encephalitis very often has an unfavourable long-term outcome.

9. “Monkeypox outbreaks in Canada and worldwide signal shift in behaviour of virus”

This inane headline [27] is par for the course with the CBC, Canada’s taxpayer-funded outlet of government propaganda. What is not explained is how and why the virus might have “changed behaviour”—has it mutated spontaneously? Been tampered with? Are host factors responsible?

The first sequences that have been published show a peculiar pattern [28]: relative to the strain that was isolated in 2018 in the UK, there are approximately 50 mutations, which is a remarkably high number. The great majority of these can be explained as having been caused by the activity of a specific class of antiviral host defence factors, APOBEC3 [29]; these are the ones shown in the graph above. It should be easy enough to generate this peculiar pattern of mutations by propagating the virus in appropriately manipulated cell cultures [30] or transgenic animals. Experience with SARS-CoV-2 [31,32] suggests that lab manipulation is likely, but the evidence adduced here does not suffice to prove it. 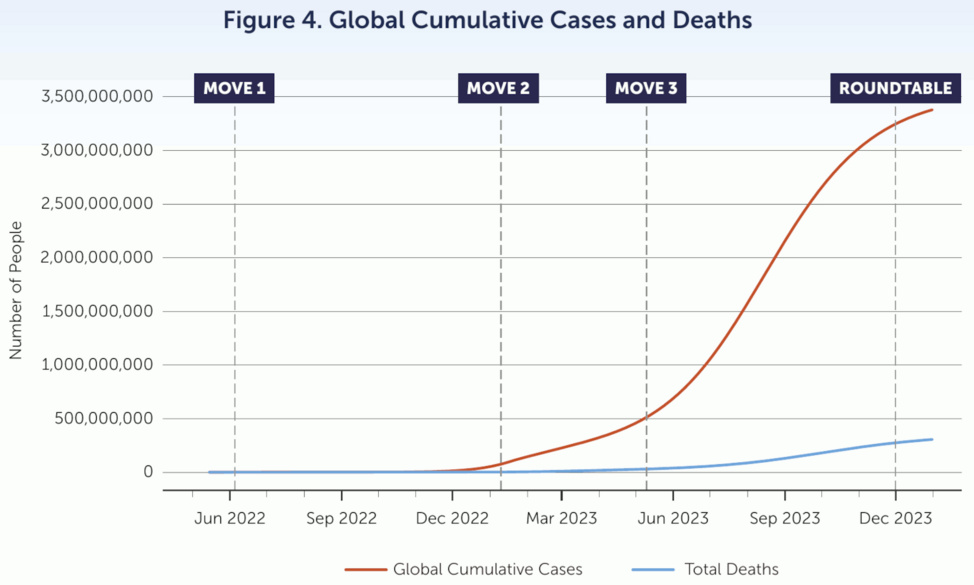 The visionary people at the Nuclear Threat Initiative (NTI), together with the Munich Security Conference (MSC), carried out a war game one year ago that assumed the outbreak of monkeypox in May 2022 [33]. The outbreak was assumed to have been caused “by a terrorist attack using a pathogen engineered in a laboratory with inadequate biosafety and biosecurity provisions.”

The published scenario skips over technical details as to what properties of the virus had been engineered, but it assumes a global total of three billion cases and a death count of 271 million. It also makes some staggering assumptions about the efficacy of “non-pharmaceutical interventions” against the virus—the fictitious country of Cardus, which foolishly neglected to introduce such measures, suffers 100 times more cases than the republic of Dranma, which wisely did adopt them.

The exercise does not give any detail about nature of these interventions, nor does it explain just why, so unlike the measures for controlling COVID, they were so strikingly effective. Yet, it seems almost certain that Cardus’ sorry fate is in no way to be construed as a veiled threat against those backward nations which would not comply with these measures.

The entire “study” is notably short on scientific rationales yet long on foregone conclusions; but an appendix details some aspects of the epidemiological model, which make it plain that the failure to control the epidemic is built right into the model’s assumptions. The recommendations, predictably, focus on giving more power to international bodies such as the WHO and their cronies.

While this entire war game seems absurd on its face, past experience unfortunately suggests that we can’t afford to dismiss it. However, some deviations from the script are conceivable; for example, instead of a terrorist group from the fictitious country of Arnica, it might yet emerge that it was indeed the Russian government which released this novel strain of monkeypox.

Independent investigative journalist Whitney Webb has written an interesting background piece on the developing outbreak [34]. Two companies stand to gain greatly—Siga Technologies, whose only product is a drug for treating poxvirus infections such as monkeypox, and Emergent Biosolutions, which owns the rights to a vaccine and was also producing vaccines against Anthrax in 2001 and more recently against COVID-19 [35]. The observation that the usual suspects are getting in on the act early further confirms our suspicion that an attempt is underway to engineer the next preplanned, man-made global pandemic.

Given the facts, lets not fall for this monkey business.